The JATC's role is oversee the apprenticeship programs within the four utilities and insure training agents act in compliance and within the standards set forth by the State of Oregon Apprenticeship and Training Division. 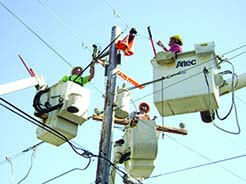 The apprenticeship program dates back to the IBEW, Local 26 (Washington D.C. area) beginning in 1893. In 1946, Local 26 and local electrical contractors established the Joint Apprenticeship Training Committee (JATC) to preside over the region's electrical training.  By 1956, there were 100 apprentices who attended classes four nights a week after on-site training during the day. The apprentices had to pass exams every six months, as well as licensing exams for the city, and a final exam before becoming a journeyman electrician.